WHILE the eyes of the world will be on Anfield’s lush football turf this evening, more green shoots of progress are being made in the neighbourhood’s housing regeneration programme.

Liverpool City Council approved the next phases of the project, clearing the way for new environmental spaces, as well giving the green light for more new homes and housing refurbishments. 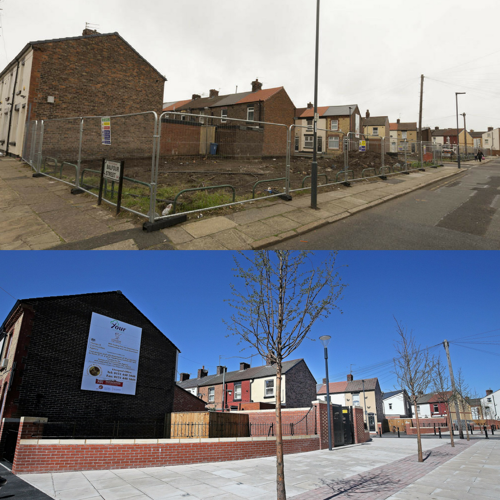 Now, following cabinet approval, we will deliver more environmental works following a number of demolitions along Blessington Road and will work up designs for more than 20 homes along Breckfield North Road/Robson Street.

The Anfield Regeneration Project is a partnership between Liverpool City Council, Your Housing Group, Liverpool Football Club and Keepmoat Homes. With an estimated investment of £255m, more than 600 new and 600 refurbished homes have already been delivered.

With Keepmoat due to submit a planning application for a further 86 homes, and Your Housing Group proposing more homes to complete the so-called ‘Anfield Village’ area, another 150 new and remodelled homes are projected to be added to the neighbourhood.

Councillor Ann O’Byrne, Deputy Mayor of Liverpool, said: “Anfield is undergoing a phenomenal regeneration and one that will benefit families for generations to come. It’s a team effort much like the football team, with everyone working together. The eyes of the world are often on what takes place inside the stadium but the wider area is blossoming into an attractive community, one that residents can be proud to call home.”

Dave Litherland, Head of Regeneration for Your Housing Group, said the cabinet’s approval meant the regeneration of the area could progress into its final phases.

He said: “Most of our work has been in bringing homes back into use, including converting two homes into one and rebuilding existing homes that give the area its character. The street improvements are really the icing on the cake and underline the improvements we’ve made.

“The cabinet decision is great news. We can now move straight into the next phase of our environmental works and push on with our plans to deliver more new and remodelled homes for Anfield. There is now strong demand for homes in Anfield.”

Within the wider regeneration project the housing works are providing much-needed homes for local residents and are helping to build a better community. The work seeks to use local labour, local supply chains and supports apprenticeships wherever possible.

The wider regeneration project has seen the transformation of Stanley Park, a new high street and huge improvements to Liverpool FC’s stadium, expanding the ground capacity from 45,000 seats to 54,000.