Your Housing Group has announced plans to build a 30-storey apartment building on Liverpool’s iconic waterfront.

The Group is planning the 276 apartment development on the Liverpool Waters site as part of a major investment into the build to rent market.

The proposed £48m development at Princes Dock, Liverpool Waters would be YHG’s third build to rent development, although the first in Liverpool, and would be marketed under the organisation’s successful PRS brand, Hive.

Your Housing Group expects to submit a planning application for the development in early 2017 and begin work later in the year, subject to consent.

YHG owns 33,000 homes in the North West, Yorkshire and Midlands and is a key partner in the on-going regeneration of Anfield, north Liverpool, which has seen hundreds of homes refurbished in the last three years.

The proposed 30-storey tower, designed by Brock Carmichael Architects, would be on Princes Dock and form part of Peel’s £5.5bn Liverpool Waters development.

The YHG waterfront development would be named Hive–City Docks and would offer residents river and city views, 24-hour concierge services, premium restaurant and bistro facilities as well as a range of in-apartment technologies. 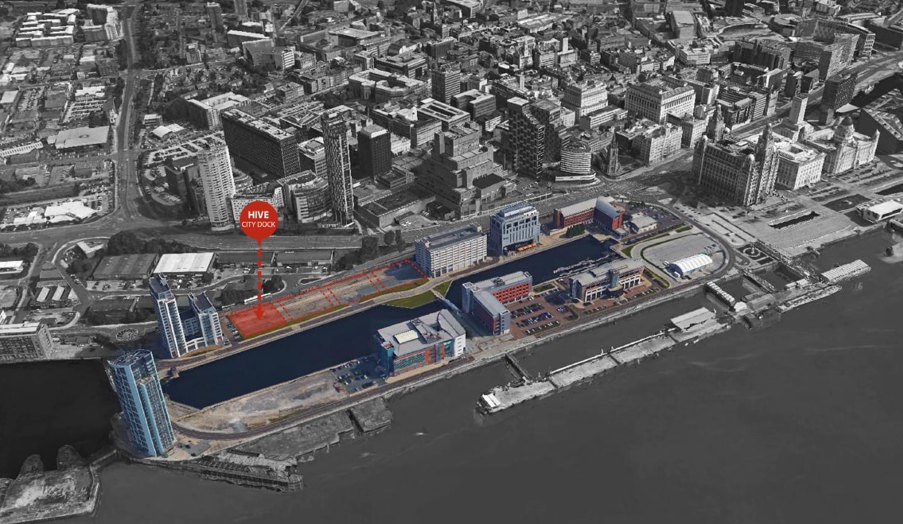 News of the plans comes just a month after developer Moda Living received consent for a 34-storey tower on an adjacent site. Together, the two developments represent significant progress in Peel’s Liverpool Waters vision.

Stephen Haigh, Executive Director at YHG, said the development was evidence of the organisation’s commitment to Liverpool as a strategic growth area. It follows years of close partnership working between YHG and Liverpool City Council.

Mr Haigh added: “Hive– City Docks is a hugely exciting and innovative project for us and our Hive brand. Following the successful launch of our Hive brand earlier this year, we have completed our first development comprising of 106 homes, all for the build to rent sector. Hive-City Docks is our first development in the heart of a city and it shows the versatility of our offer.

“Hive is a rental brand at the forefront of technology; with the ability to adapt the range of technologies on offer to meet lifestyles needs. We have an active pipeline of further developments and are looking forward to bringing many more Hive products to the market very soon.”

Liverpool Mayor Joe Anderson said: “High quality housing is essential for economic growth. Developments like this, in a stunning waterfront location, are crucial if we are to attract and retain the kind of talent which will fuel that growth.

“Your Housing Group’s commitment to Liverpool has already resulted in transformational improvements in the north of the city and I am delighted to see the organisation extend its activity to the city centre with this scheme.”

Lindsey Ashworth, Development Director at Peel, said: “Hive – City Docks represents a major milestone in our vision to create a stunning waterfront for Liverpool which will be a vibrant place to live, work and visit. There is now significant momentum behind our plans as investors realise the potential and opportunity which this site offers.”

Your Housing Group was advised by Citizen Living and Shulmans solicitors. Liverpool based Brock Carmichael will act as Architects on the Waterfront development and it is estimated that Hive – City Docks would take 24 months to build, with completion in early 2020.